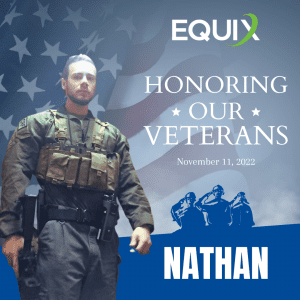 Nathan joined Equix in 2016 as a laborer and has since worked his way up to Superintendent. He is currently leading his team in their work on a retirement project in Florida.

“As a leader, I understand what is expected of me, and I feel honored and privileged to be a part of the direction and growth of Equix,” said Nathan.

Before joining Equix, Nathan served in the United States Army as a Fire Team Leader for four years and nine months, completing two tours as part of Operation Iraqi Freedom. Nathan initially enlisted in February 2005 during wartime as an Infantryman, expecting to see combat. His duty stations were at Fort Wainwright, Alaska, and Fort Riley, Kansas.

“During basic training, my eyes were opened to the full extent of my capabilities,” said Nathan. “I was taught to push myself to new limits…physically and mentally.”

Over time, that practice became a discipline and helped him grow and continue to propel forward.

This new ability to move past barriers has been a great asset to Nathan, but it also gave him some frustrations when he was first discharged.

“I found difficulties with people who do a lot of complaining,” he said. “It was more due to a lack of experiencing those levels of hardship, so what seemed like a more daunting task to them did not have the same effect on me mentally.”

Nathan added, “The military sent me to impoverished countries that had seen the effects of war.

“I wish civilians knew how lucky and privileged we are to live in a country like the United States of America with the rights and freedoms we cherish.”

While he may not miss the military wages, Nathan fondly remembers the camaraderie of being in the infantry. There was one person, in particular, that had a profound impact on him.

“Staff Sergeant Philander Kerry was an exceptional leader who always took care of his squad. I served with him during my first deployment when I was 18 years old, and he gave me the guidance and training that was necessary to make me successful,” recounted Nathan.

The strength Nathan found in himself during his time in the Army is abundantly apparent in how he now lives his life. Not only is he a leader within Equix, but he is also an entrepreneur, husband, and father of two daughters. We’re incredibly fortunate to have his courage and determination backing our Equix family.