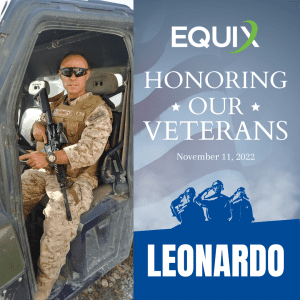 Did you know that Leonardo, a Field Safety Coordinator at Equix, also belongs to a Construction Battalion station in Mississippi? He is part of the United States Navy Seabees reserve forces and served as Petty Officer First Class and E6-SW1 (steelworker).

“I first joined the U.S. Navy in February 2012 with the inspiration of my father,” said Leonardo. “He served in the military forces of his native country.”

Leonardo was deployed to Iraq from 2016-2017 and Afghanistan from 2020-2021. While in Afghanistan, he contributed to the Retro Operations in July 2021, making him one of the last troops to have been boots on the ground after the military spent 20 long years in the country. Leonardo is also an Army Achievement Medal recipient and earned the distinction of Seabee Combat Warfare Specialist.

While on active duty, Leonardo developed the discipline of following instructions while being an integral part of a team. He also learned to appreciate some of the simple things in life that we often take for granted.

“I love visiting new cities or countries, getting to know about different cultures, and even making new friends while overseas,” he said. “I loved that my role in the military allowed me to travel.”

Now that he is back to a more civilian life, Leonardo has had to adjust to accommodate the different perspective that his time in the Navy gave him.

“One of the hardest things that I have had to learn to deal with has been the lack of discipline or how difficult it is for some people to do the right thing, especially when no one is looking,” Leonardo said. “I believe that if we all take part in the military, even for a short period of time, there would overall be greater understanding and less selfishness in this world.”

As he is adjusting to meet the general public halfway, Leonardo hopes for continued learning and understanding between civilians and military members.

“Civilians tend to stereotype military members, thinking we all come back with a “screw loose” after seeing combat or returning from any tour,” he said. “However, it’s important to understand that everybody’s emotions are different, and while there might be a person that emotionally loses balance, it’s not always the case.”

Leonardo began his career at Equix as a laborer in 2018. Eight short months later, his hard work and talent landed him a promotion to foreman. When a safety coordinator position opened up, Leonardo’s military experience in safety and his previous leadership within Equix made him the perfect candidate!

“What I like about my job is the sense of helping people by training and mentoring them,” said Leonardo. “Also, I have the freedom of making my own daily schedule and having various locations to work.”

Leonardo is a husband and father of four children, two biological and two through marriage, and he is purchasing his first house! Leonardo spends as much time with his family as possible and enjoys various sporting activities, including soccer, bowling, golf, running, and traveling.