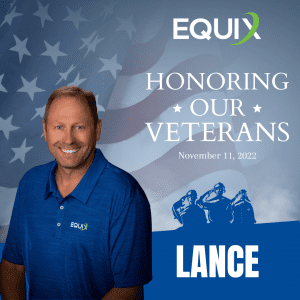 Two weeks after completing high school, Lance, Senior Project Manager at Equix, made the bold choice to join the United States Army, where he served as a Team Leader. Lance knew college wasn’t the path for him and decided that the Army was the best home for him while he figured out what he wanted to do long term.

As it turns out, he made the right call! Lance served from 1985 to 1990, and during that time, he became mentally and physically stronger and served on multiple tours.

“From 1985 to 1986, I was in DMZ [demilitarized zone that separates North and South] Korea,” said Lance. “While my platoon went out on maneuvers during our time there, we once had to go three weeks without showering or changing into clean clothes.”

In addition to serving in Korea, Lance was stationed at Fort Drum in New York (1986-1987). Additionally, he was a part of Operation Golden Pheasant in Honduras (1988) and Operation Just Cause in Panama (1989-1990) while stationed at Fort Bragg in North Carolina.

“It wasn’t all bad, though! I actually enjoyed the routine of getting up in the morning to do his physical training and also got to learn how to jump out of an airplane, which is pretty cool.”

While the day-to-day of being in the Army had its challenges, so did coming home. One aspect of returning to civilian life that was difficult for Lance realized that life in his small town had continued without him. It has also been hard for him to see several people’s disrespect for the flag and what it stands for.

Lance joined Mi-Tech in July 2012 as the Pipe Services Inspection Manager and then moved into his role at Equix in 2015. He loves the flexibility and opportunities to meet new people in his position.

Lance is an avid family man and lives in Prior Lake, Minnesota, with his wife, Anne, and mother-in-Law, Lesley. He has a son, Tanner; a daughter, Kendra; and a son-in-law, Cody. Kendra and Cody are expecting their first child in March, and Lance is extremely excited about becoming a grandfather!

“In addition to spending time with my family, I enjoy hunting, fishing, cooking, and making improvements on my 60-acre property.”