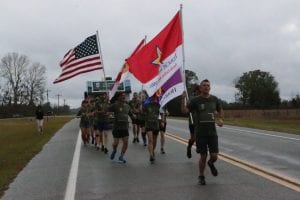 A Safety Coordinator’s Run for the Fallen 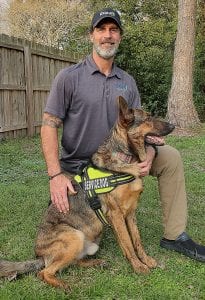 Randy has been the Safety Coordinator at Equix’s Energy Services division since October of 2019, and he recently participated in the first-ever Florida Run For The Fallen. Before beginning his career at Equix, Randy worked as a Safety Manager in the Smokey Mountains for a lumber company, and before that, he served 21 years in the United States Army.

Randy was deployed on three, year-long deployments to Iraq and two to Afghanistan. He medically retired from the Army in May 2017, which marked the beginning of his career in Safety.

“I did not want to separate from the military and miss it very much,” said Randy as he spoke on how he felt leaving the Army. “I feel very fortunate because Equix 100 percent supports me bringing Leo, my service dog, to work with me.”

Outside of work, Randy is happily married to his best friend, Shanon, and is a proud father to three children — a 26-year-old daughter, Taylor, and two sons, Evan (18) and Wyatt (22). Evan recently graduated from Army Basic Training making him a fourth-generation military serviceperson.

Randy and Shanon are very involved with various veterans organizations. Randy is a member of the Combat Veterans Motorcycle Association, whose focus is to provide assistance and help to veterans, veteran care facilities, and other veteran organizations. He is also a member of Team Red, White & Blue (Team RWB), which assists veterans through physical fitness and training camps, and social interaction to combat isolation, weight gain, lack of purpose, and other health issues. Lastly, Randy recently became a member of the Jacksonville Veterans Council and serves on the grant approval board.

Shanon, a custom kitchen and bathroom designer, is the co-founder of the Bomber Girls Ladies Riding Club, whose mission supports soldiers and veterans. She is also one of the major planners for Run for The Fallen.

Randy likes to spend his spare time motorcycling, kayak fishing, and running. He has been running for 25 years and continues to run as one of his therapy avenues. He and Leo (pictured with him above) are avid running partners. His talent for running and passion for veteran issues is what inspired him to participate in Florida’s Run for The Fallen, a running event where teams run together to honor fallen heroes and their families.

It is an event that is sponsored by Honor and Remember and provides comfort and encouragement for family members of fallen heroes to make sure their loved ones are never forgotten. During the event, runners stop every mile and call out the names of their loved ones. Doing this act helps the family in the healing process because they know their loved ones are being remembered. This year represented Florida’s first annual run, where participants covered 170 miles from the state capitol in Tallahassee to the Veterans Memorial in Jacksonville. Gold Star Families also receive flags on behalf of Honor and Remember.

When he was originally asked to participate in this event as a core runner, Randy researched Honor and Remember thoroughly and discovered that it was a great organization that focuses on the families of veterans.

“After five deployments and being able to bring most of my soldiers home, I saw this as an amazing opportunity to say ‘thank you,'” explained Randy, “Not only to fallen heroes but also to their families for their ultimate sacrifice.”

Randy finished the race and ran an impressive total of 50 miles for this event.

“I was exhausted,” said Randy. “The emotional aspect of meeting with Gold Star Families combined with your own emotions and putting your body through this much physical stress is very draining on the entire body.”

At the request of Florida Run for the Fallen, Randy will be the Run Director for next year’s challenge and will begin planning for the event in April.

If you are interested in helping out, whether you are a runner or not, visit http://florida.usarunforthefallen.org to get involved. Multiple volunteer positions are available.

Hardships can happen in every corner of life. If you or someone you know needs support, your military family is committed to helping. Support is available at any of the organizations above.